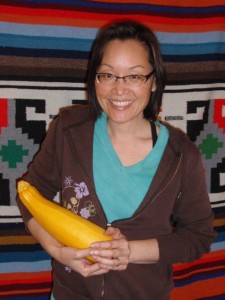 I’ve never had a green thumb.

When I was younger, I’d water my mom’s garden and help her kill slugs, but I just wasn’t that interested in gardening.

When I got my own place, I didn’t buy plants. Just couldn’t be bothered even though I’ve always enjoyed looking at flowers and plants. Sometimes, someone would give me a plant for a gift and I’d take care of it.

But then I met my husband Marcus who has a thumb so green that his hand could pass for the Incredible Hulk. Marcus can turn a dirt patch into an oasis; a stick into 20 pounds of wine grapes; and a sliver of a leaf into a 3-foot tall aloe vera with arms as thick as a human’s.

When we moved into our townhouse back in 2008, it had no yard, just a wooden deck. But Marcus didn’t let that stop him.

Over time, Marcus transformed our deck into a lush garden, replete with all kinds of plants, flowers, and edibles; including pitcher plants, hostas, fuchsias, a sprawling grapevine, raspberry bushes, and large pots of climbing hops.

But the one thing that was hard to grow was vegetables. After building his own planter box that was as big as a coffin, Marcus spent several years trying to grow tomatoes, brussels sprouts, pumpkins, cucumbers, watermelon and more. We had one good year of tomatoes but most years, not much at all.

So, we applied for the City of Seattle’s P-Patch Community Gardens Program. It’s a screaming good deal. For less than $50 and eight hours of volunteer time per year, you get a garden plot to call your own (and free water!). The only thing is the wait list is very long.

But we were patient…and two and a half years later, we got in!

I decided then and there that I would learn to garden. We would do it together. 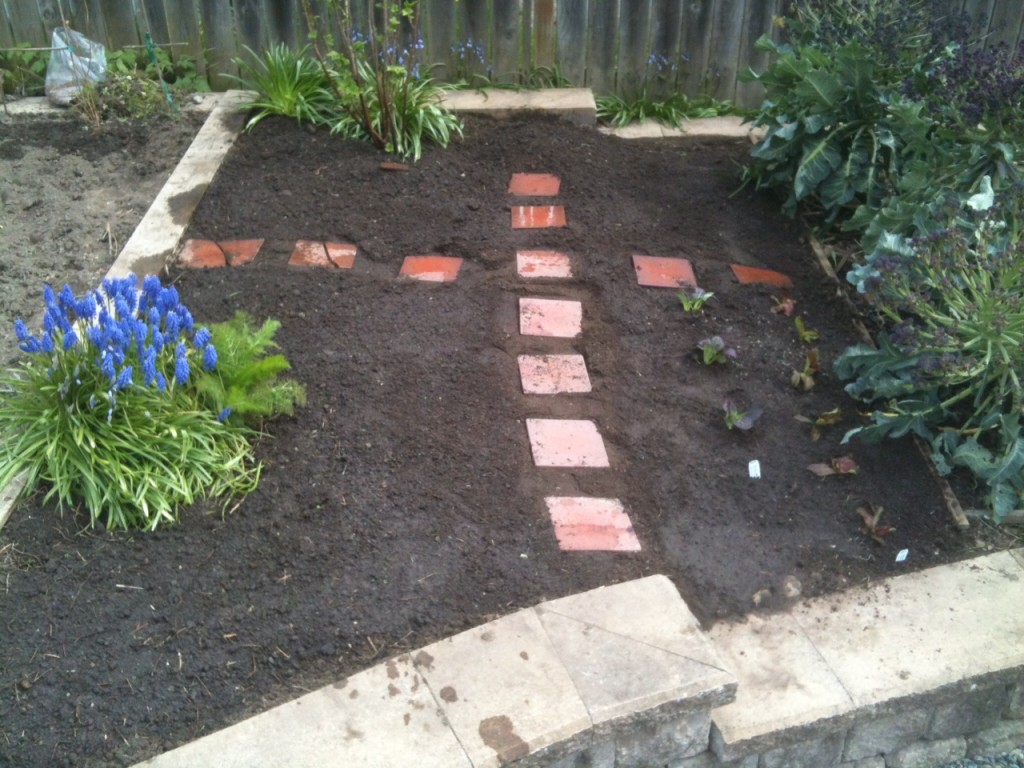 Here’s what our patch looked like after we weeded it and put tiles down for stepping on. There’s also some radicchio starts on the right hand side. 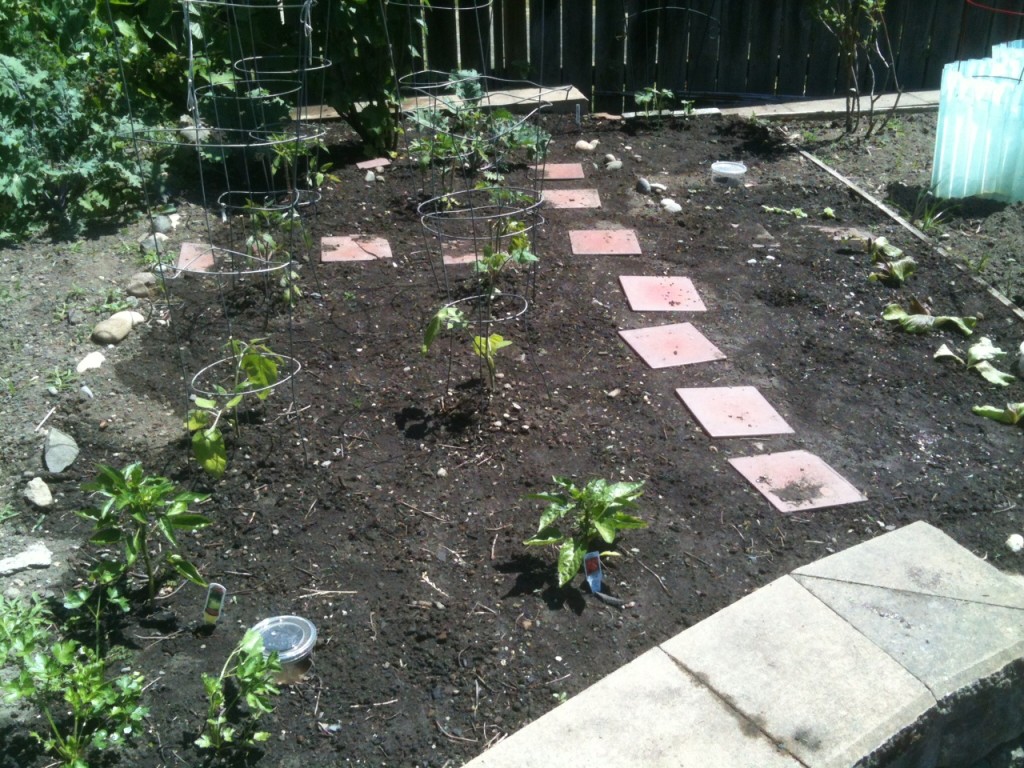 Here’s what our patch looked like after we removed the grape hyacinths and planted our first starts of tomatoes, peppers, lettuce, kale, cucumbers and parsley. 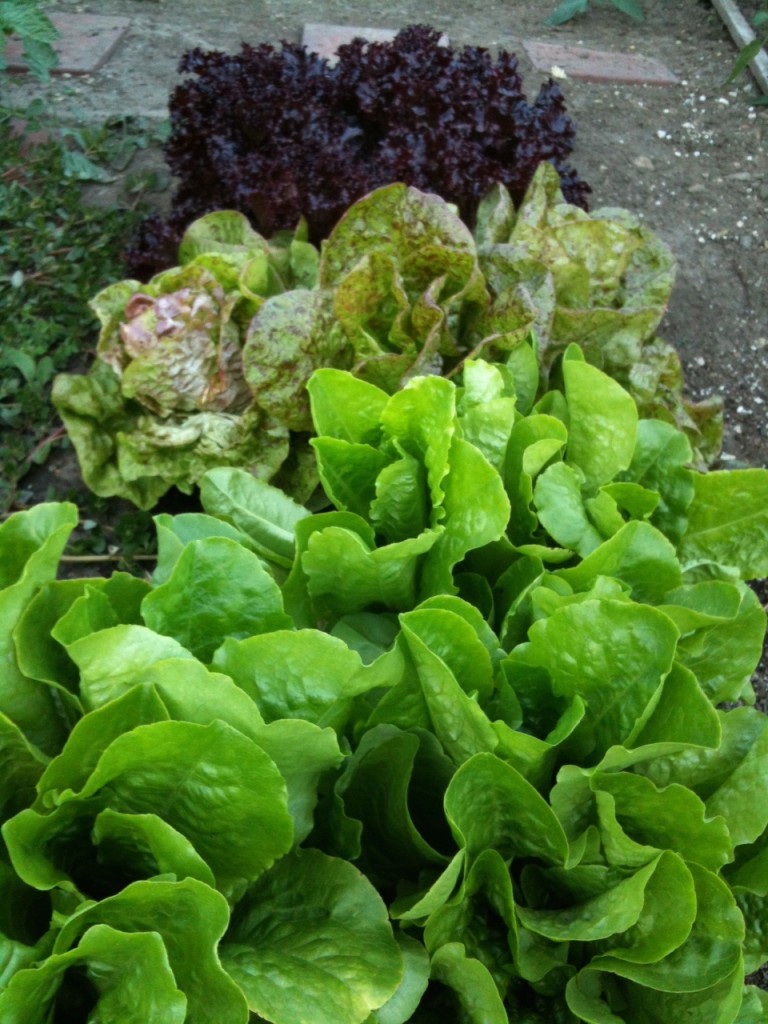 We received our almost-100-square-foot plot at the Thyme P-Patch in April and after a month or two, we were harvesting lettuce! Let me tell you–fresh is so much better than store-bought. 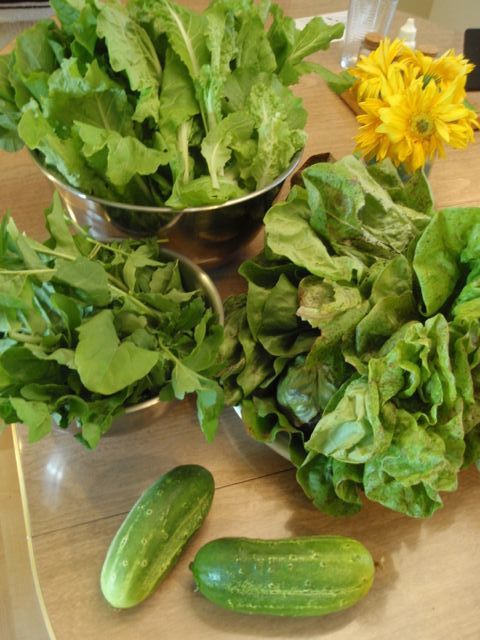 Pretty soon, we were cutting our produce shopping at the grocery story in half! A typical weekly bounty from our patch is pictured above: buttercrunch lettuce at the top, butterhead speckles lettuce on the right, cucumbers, and arugula on the left. 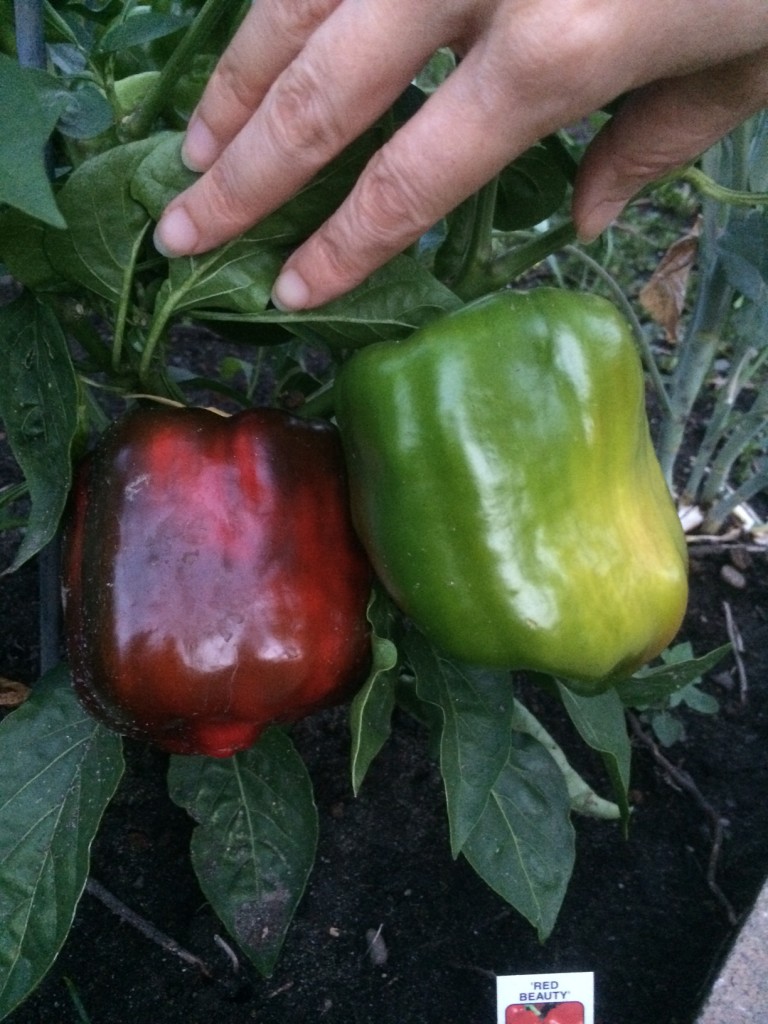 In just a little over four months, I’ve learned a lot about vegetable gardening. Like how you should stagger planting your lettuce starts by a week or two so that you always have fresh heads to harvest all summer long. Thanks to fellow P-Patcher Mark, I learned how to make slug traps out of old yogurt containers and cheap beer. Also, I had no idea that it would take nearly 120 days for bell peppers to ripen and turn red. But what beauties they are when they do turn! 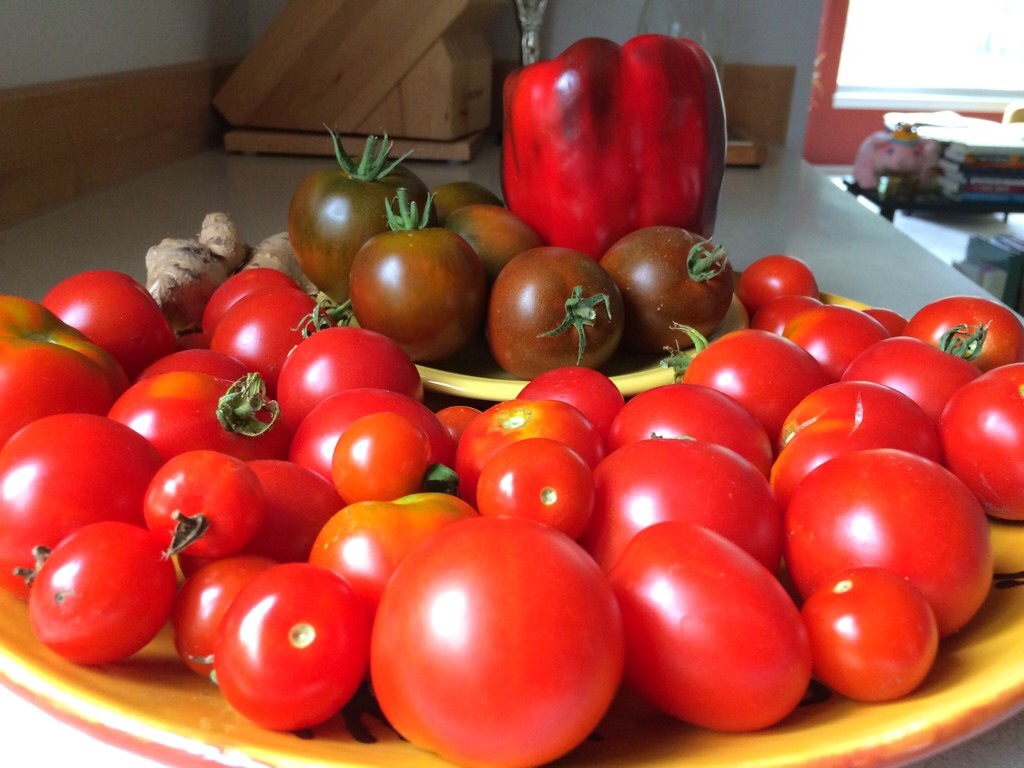 Speaking of beauties, here’s one of our red bell peppers with our bumper crop of Uncle Wilf Tomatoes and Black Russian Tomatoes courtesy of fellow Ballard gardener Krazy Kate who sells her precious tomato starts one day a year in May. 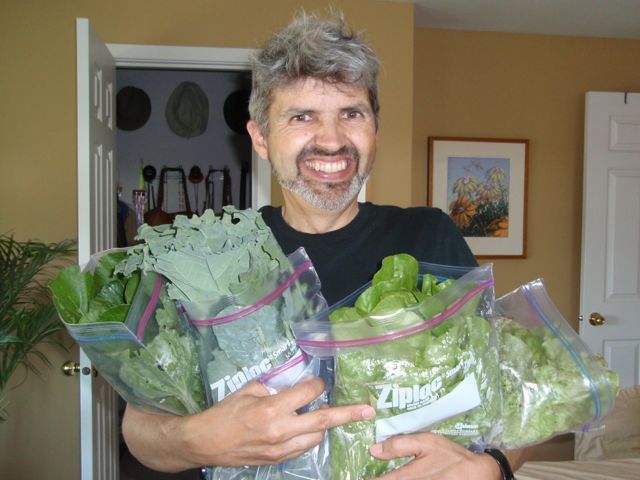 Most importantly, with our new P-Patch, my gardener husband is really happy. 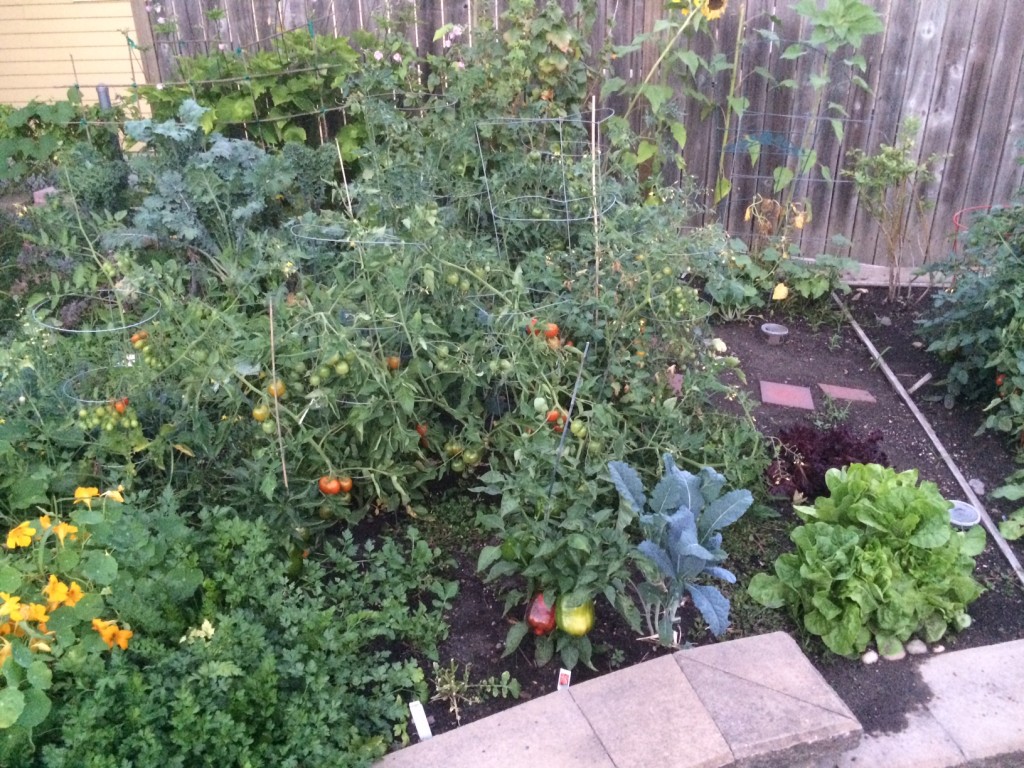 Which makes me happy.

Finally, at the ripe old age of 42, I can officially call myself a gardener.

ps. The yellow squash “baby” I’m holding in the first photo was gifted to us by a fellow P-Patcher. Thanks, Shannon!